Don't waste your time on finding the right part.

(We respond within one hour)

Request your quoteWe respond RFQ's within one hour

The project leader of Space-X contacted our USA sales manager. They needed a very specific piece for the development of the Space-X rocket.

We were able to design and produce it, we got the order on the 27th of July. And on Monday 26 September we sent it to America.

The article is in Dutch, translation is beneath 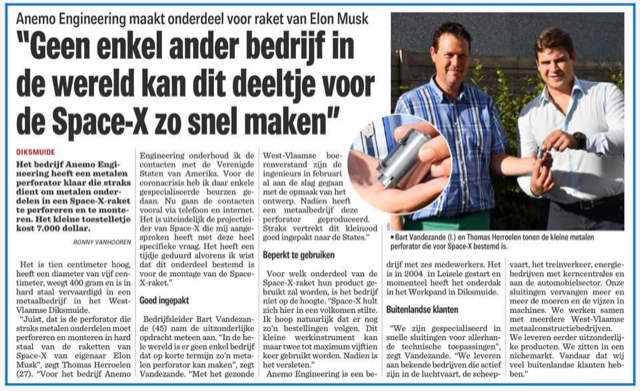 "No other company in the world can make this piece for the Space-X so fast".

The company Anemo Engineering has finished a metal Broaching Tool that will soon serve to perforate and assemble metal parts in a Space-X rocket. The small device costs 7,000 dollars.

It is ten centimetres high, has a diameter of five centimetres, weighs 400 grams and is made of hard steel in a metal company in Diksmuide, West Flanders.

"That is precisely the Broaching Tool that will soon have to perforate and assemble metal parts in hard steel of the rockets of Space-X of owner Elon Musk," says Thomas Herroelen (27). "For the company Anemo Engineering, I maintain the contacts with the United States of America. Before the corona crisis, I did some specialised trade fairs there. Now, the contacts are mainly by phone and internet. In the end, it was the project leader of Space-X who approached me with this specific question. It took a while before I knew that this part is destined for the assembly of the Space-X rocket."

Company manager Bart Vandezande (45) immediately accepted the exceptional order. "In the whole world there is no company that can make such a metal Broaching Tool in a short time," says Vandezande. "With a healthy dose of West-Flanders' common sense, the engineers started working on the design in February. Afterwards, a metal company produced the Broaching Tool. Soon the gem will leave, well-wrapped, for the States.

The company does not know for which part of the Space-X rocket their product will be used. "Space-X is completely silent on this. Of course, I hope there will be more orders like this. This small working instrument can only be used two to fifteen times maximum. After that it is worn out."

Anemo Engineering is a company with six employees. It started in 2004 in Leisele and is currently housed in the Werkpand in Diksmuide.

"We specialise in quick closures for all kinds of technical applications," says Vandezande. "We supply well-known companies active in aviation, shipping, rail traffic, energy companies with nuclear power plants and the automotive sector. Our fasteners are increasingly replacing the screws and bolts in machines. We work together with several West-Flemish metal construction companies.

We deliver rather exceptional products. We are in a niche market. That is why we have a lot of foreign customers.

Take a look at the Clinserts broaching tool

in fact what they were looking for is an alternative to the pneumatic installation tool nose assembly: 70955ASBK-206H